Seoul, Korea, 06 February 2018 – Today, executives from leading international oil & gas, energy, science & technology and automotive companies gather in Seoul for a first-of-its-kind strategic dialogue with the Korean government on how to accelerate the deployment of hydrogen technologies in the region.

Taking place amid a series of bold announcements on hydrogen around the world, the inaugural “International Hydrogen Energy Forum” brings together top representatives from the Korean National Assembly as well as several Korean ministries with members and guests of the Hydrogen Council. This includes market leaders such as 3M, Air Liquide, Audi, Great Wall Motor, Hyundai, Iwatani, Kawasaki, Plastic Omnium, Shell, The Linde Group, Toyota, and Weichai. Hydrogen Council supporting members Faurecia, Toyota Tsusho, Mitsui and Gore will also be in attendance.

This meeting represents the first step in the Hydrogen Council’s strategic effort in 2018 to launch a multilateral dialogue between industry, policy makers and investors to accelerate deployment of hydrogen technologies to address challenges posed by the energy transition. If deployed at scale, hydrogen technologies could deliver about a fifth of the world’s energy demand by mid-century, while reducing CO2 emissions by 6Gt annually and creating 30 million jobs .

The Hydrogen Council’s latest study – Hydrogen, scaling up – identified Korea as leading world-wide adoption of hydrogen-powered fuel cell vehicles, alongside Germany, Japan and California. By 2030, hydrogen-powered passenger cars could represent close to 3% of new vehicle sales – meaning in Korea almost every 12th car sold could be fuelled by hydrogen . The Korean government has also announced ambitious plans to reduce overall CO2 output by 37% until 2030 compared to business as usual, a goal which goes hand in hand with the announcement of increased investments in hydrogen refueling stations – with a target of 310 by 2022.

“We are thrilled to see the Hydrogen Council come to Korea and make such a strong, concrete case for the hydrogen economy. Hydrogen is gaining momentum and we look forward to working with policymakers in Korea and other key markets to drive it forward.” states Dr. Woong-chul Yang, Vice Chairman of Hyundai Motor Company and Co-Chair of the Hydrogen Council.

Globally, governments are stepping up their game when it comes to hydrogen, with recent announcements from the Governor of California and the Chinese city of Wuhan, laying out plans to increase investments and infrastructure.

Benoît Potier, Chairman and CEO, Air Liquide, Co-Chair of the Hydrogen Council, added: “We are pleased to see more and more governments around the world encouraging the development of hydrogen as they are discovering the many benefits of this technology. Multilateral dialogues are essential to foster effective policies and supporting measures. By showing their support, early adopters are helping the dynamic in place, and we look forward keeping the pace and expanding this development.” 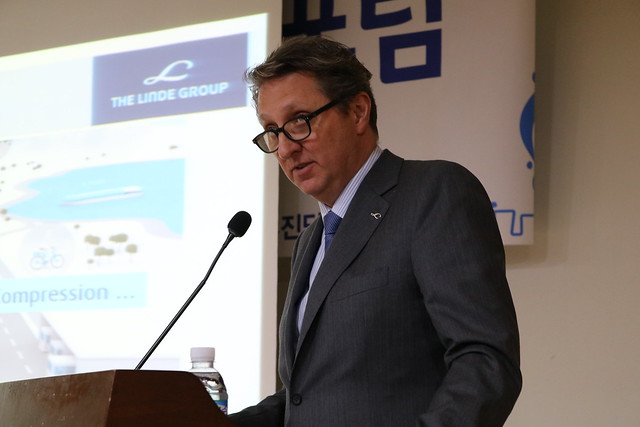