Amsterdam, 9 April 2019 – The Hydrogen Council, a global initiative of CEOs representing energy, transport, and financial institutions advocating for the accelerated deployment of hydrogen solutions, and Energy Observer, the first hydrogen vessel to travel around the world that emits no greenhouse gases, fine particles or noise, today announce their strategic partnership to advance hydrogen technologies. Together, the two groups are helping accelerate the energy transition by making wide-scale, decarbonised maritime transportation a reality – demonstrating that hydrogen is a viable, safe and sustainable option.

Maritime transport emits around 940 million tonnes of CO2 annually and is responsible for about 2.5 percent of global greenhouse gas (GHG) emissions. This could increase by between 50 percent and 250 percent respectively by 2050, according to the International Maritime Organisation (IMO). Hydrogen Council members, many of whom are part of the mobility sector, realise the potential for hydrogen to decarbonise transport as part of the emerging clean energy revolution, and view the Energy Observer voyage as a significant step toward making hydrogen more visible to decision makers around the world.

“The Hydrogen Council is proud to partner with Energy Observer. We support and are inspired by their core mission of using hydrogen to decarbonise marine transport. This voyage proves to the world that long-distance travel using hydrogen is a real possibility. Our new partnership will create greater visibility of how hydrogen is being developed and deployed today, with the view of being widely scaled up tomorrow,” said Pierre-Etienne Franc, Co-Secretary of the Hydrogen Council and Vice President of Air Liquide’s Hydrogen Energy World Business Unit.

“Energy Observer is pleased to cooperate with the Hydrogen Council, as we share the same ambition for hydrogen to foster the energy transition. Hydrogen is a real key to propel our vessel of the future that works through a mix of renewable energies and a system that produces carbon-free hydrogen from seawater. This technological and scientific challenge aims to test cutting-edge technologies in extreme conditions, anticipating the energy networks of the future that could be used on land,” says Victorien Erussard, founder and captain of Energy Observer.

Hydrogen is the most abundant chemical element in the universe. Inexhaustible, it displays exceptional energy density: it releases up to 4 times more energy than coal, 3 times more than diesel and 2.5 times more than natural gas. Its combustion emits neither greenhouse gases nor fine particles. Hydrogen’s potential is, therefore, immense, and in terms of energy transition, it opens up a significant field of possibilities.

A recent Hydrogen Council report, Hydrogen, Scaling Up, projects there could be thousands of passenger ships transporting people without carbon and local emissions by 2030. By mid-century, the Council also purports that hydrogen could power a quarter of passenger ships worldwide, contributing to roughly 20 percent of CO2 abatement as required by the Paris Agreement. The Council joins a robust group of visionary partners had by Energy Observer including the French Association for Hydrogen and Fuel Cells (AFHYPAC). 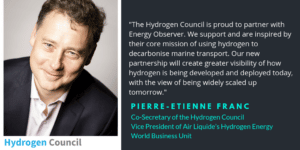