What changes have you seen within the hydrogen ecosystem and community in the past year?

It is felt that recently companies and governments around the world are showing a greater interest in hydrogen energy and stronger will to pursue it. This trend was well demonstrated at the Hydrogen Energy Ministerial Meeting held in Tokyo last October, and the World Economic Forum held in Davos last January, where business leaders and the heads of state passionately discussed a path forward for the hydrogen industry. Korea is no exception. Over the last three years, an increasing number of private entities have entered hydrogen business and the Korean government took the initiative in fostering a hydrogen ecosystem in the country by announcing a road map for promoting a hydrogen economy in January 2019. The Korean government is also planning to install hydrogen refueling stations across the nation, targeting to increase their number from 14 to 86 stations by the end of 2019. The Korean government is expected to provide continuous support and promote the hydrogen industry as a new growth engine of the nation.

What hydrogen related innovation, application or technology makes you most excited for the future?

Are there any recent or upcoming hydrogen related milestones in your company that you are especially proud of?

This year, a special purpose company called HyNet was established in Korea to build hydrogen refueling stations. Korea Gas Corporation (KOGAS) played a leading role in launching and operating a committee to found HyNet, which will install 100 hydrogen refueling stations by 2022. The nation-wide hydrogen charging infrastructure is expected to reduce inconvenience significantly for hydrogen fuel cell vehicle owners and provide a greater access to hydrogen.

Which area of hydrogen development and deployment is your company investing in currently?

KOGAS has stepped up its efforts to develop equipment and core parts required to build and operate hydrogen refueling stations and a proprietary hydrogen production technology through natural gas reforming in an attempt to lower supply costs. Currently, KOGAS is conducting government-commissioned R&D projects to develop major parts for hydrogen refueling stations, station operation technology, and a proprietary natural gas reforming process for hydrogen production with an aim to scale up the process’ capacity in a phased manner.

What in your opinion is the biggest challenge for hydrogen in the near future, and how would you like to see it being tackled?

I believe the biggest challenge for hydrogen is price competitiveness. As eco-friendly energy, hydrogen has a lot of merits. However, its price competitiveness is not strong compared to that of other conventional energy sources. It will take some time before the global hydrogen industry grows to enjoy economies of scale and achieve higher efficiency in hydrogen production, ultimately driving down hydrogen’s price. To facilitate the development of the hydrogen industry, systemic support and R&D investments are essential during the industry’s infancy. In that regard, I hope the Hydrogen Council will continue to play an important role in soliciting support and promoting cooperation among member countries in order to strengthen the appeal of hydrogen energy and its price competitiveness.

What do you think the biggest misconception is around hydrogen right now?

Hydrogen is not a common energy source that people can easily access in their daily lives. It is true that there are concerns surrounding the safety of hydrogen because it conjures up images of a hydrogen bomb. However, note that hydrogen bombs use heavy hydrogen composed of one proton and one neutron, which is different from ordinary hydrogen with only one proton. Heavy hydrogen hardly exists in nature. Even if it does exist, heavy hydrogen can explode only when the ambient temperature exceeds 100 million ℃. It means the possibility that heavy hydrogen explodes in nature is almost zero. Ordinary hydrogen is not easily flammable because its ignition temperature is very high. Furthermore, hydrogen is so light that it rapidly dissipates in the air. When handled as per relevant procedures and safety standards, applying the latest gaseous hydrogen management technology, I am confident that hydrogen is as safe as other conventional fuels such as natural gas and gasoline.

If you could describe the future of hydrogen in one sentence, what would you say?

Hydrogen is the next big thing in energy and a solution for environmental problems that we are facing. 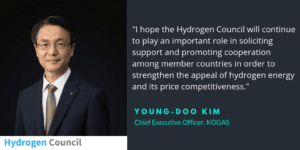