What changes have you seen within the hydrogen ecosystem and community in the past year?

In March 2018, Japan H2 Mobility, LLC (“JHyM”), was established. JXTG takes part in this All-Japan project which aims to realize a hydrogen society through developing hydrogen station networks for FCVs in the country. To make hydrogen station businesses independent and to accomplish steady dissemination of FCVs, JHyM is engaged in strategic development of hydrogen stations and their effective operation, along with provision of positive information towards a hydrogen society.

What hydrogen related innovation, application or technology makes you most excited for the future?

At present, our primary target is to spread hydrogen use in the transportation field. All related industries, mainly infrastructure operators like ourselves and automakers, are making an effort to develop technologies to achieve this goal. In the future, we expect that hydrogen will also be used in power generation and other industrial fields.

Are there any recent or upcoming hydrogen related milestones in your company that you are especially proud of?

We have opened and are now operating 40 hydrogen stations in four major metropolitan areas in Japan, making us the largest operator in the country. We also plan to further expand the hydrogen station network.

Which area of hydrogen development and deployment is your company investing in currently?

We are operating about 13,000 gas stations all over Japan.  Taking advantage of our knowledge from long-established gas station operations, JXTG has invested in and currently operates 40 hydrogen stations in domestic market.

What has been the highlight of your Hydrogen Council membership so far (most enjoyed moment, most successful activity etc.)?

We joined the Hydrogen Council this year.  Although our main business field is in Japan, we believe multilateral cooperation is necessary to scale up the hydrogen economy.  We are honored to work with leading companies worldwide to realize a hydrogen society.

What in your opinion is the biggest challenge for hydrogen in the near future, and how would you like to see it being tackled?

Currently, hydrogen is mainly produced from fossil fuels.  As hydrogen is technically producible from various energy sources including renewable energy, CO2 free hydrogen is expected to become popular in the future.

What positive indicators for hydrogen deployment have you seen recently and what is your take on the impact they may have?

The Japanese government held the Hydrogen Energy Ministerial Meeting in October 2018, demonstrating its leadership.  It has significant value that ministers of major countries discussed the use and application of hydrogen.  We expect that the cooperation under the “Tokyo Statement” adopted at the meeting will promote the dissemination of hydrogen worldwide.

What do you think the biggest misconception is around hydrogen right now?

Some people are concerned about the safety of hydrogen. In fact, hydrogen is safe and a valuable energy vector, as long as it is handled appropriately.  In this regard, we ought to give a thorough explanation on hydrogen safety to increase public understanding, and we should also operate a hydrogen information center “suiso terrace” (“suiso” means hydrogen in Japanese) in Japan to deliver hydrogen related information to the public.

Are there any inspiring or exciting hydrogen related projects going on outside of your company, or with your partners, that you would like to tell us about?

In October 2018, we signed an MOU with SINOPEC to conduct a joint study on hydrogen.  We are planning to conduct a broad study on the utilization of hydrogen including its production, storage and transportation. Decarbonized hydrogen is also in the scope.

If you could describe the future of hydrogen in one sentence, what would you say?

Hydrogen can play a key role to decarbonize energy system. 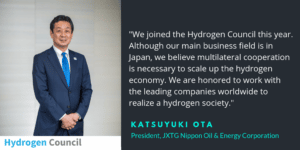